Bhutan, a Buddhist kingdom on the Himalayas’ eastern edge, is known for its monasteries, fortresses (or dzongs) and dramatic landscapes that range from subtropical plains to steep mountains and valleys. In the High Himalayas, peaks such as 7,326m Jomolhari are popular trekking destinations. Paro Taktsang monastery (also known as Tiger’s Nest) clings to cliffs above the forested Paro Valley.

Having always been politically independent, a rich and distinctive culture developed in the country over the ages. Perhaps the most important single factor in the molding of Bhutanese character and thought has been the teaching of Lord Buddha, whose eternal truths were first brought into the country from

In the Buddhist perspective, culture, tradition and beliefs and the environment are dynamic phenomena that are interwoven tightly in the web of life. As a Buddhist philosopher say, "Culture lies not in objects or monuments but in the mind and compassion towards all sentient beings".

Bhutan's unique cultural and traditional values, highly valued in themselves by all the population, are the essential embodiments of the nation's identity. For a small country located between two most populated countries of the world, India and China, the preservation and promotion of its distinct cultural identity is seen as an important means for its survival as an independent and sovereign Kingdom. It was this identity that has protected and sustained Bhutan and also provided the foundation for its major policies. 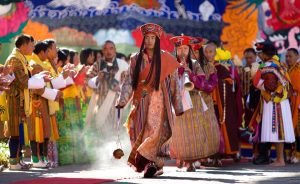