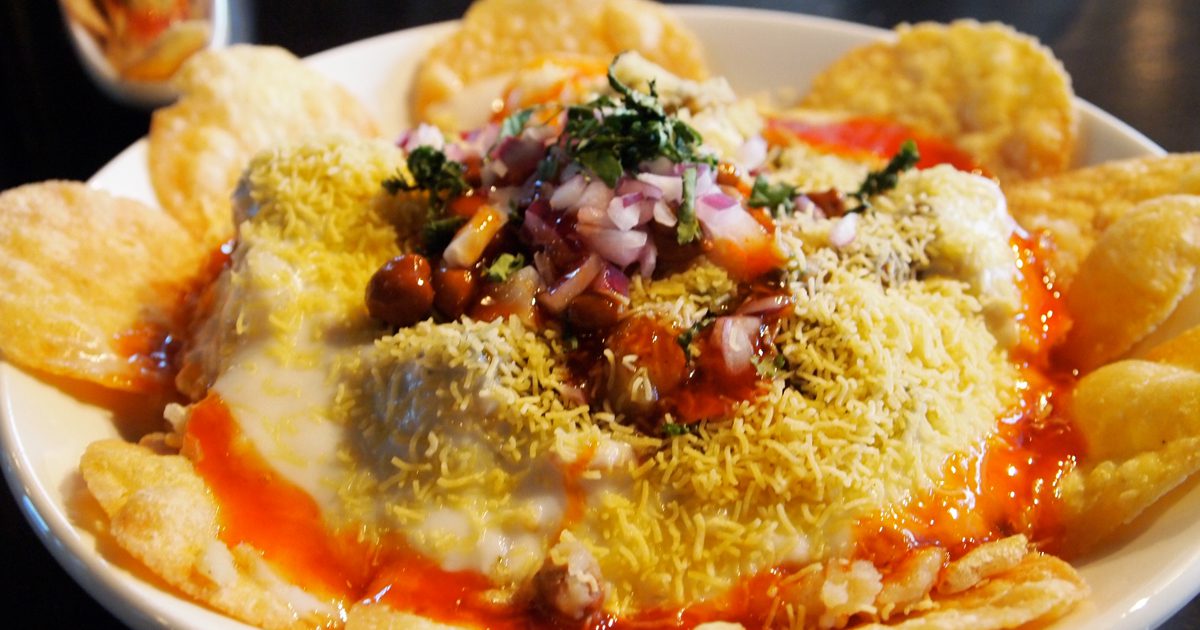 If you come to Delhi and you only do one thing you should eat. Delhi has some of the the most delicious food in India and you should sample as much of it as you can.

A popular street food snack is papdi chaat crisp fried dough wafers stuffed with spicy potatoes, chickpeas, yoghurt, tamarind chutney and chilli. A chaat is the name for a savory snack (such as a samosa or a pakora) and you can discover the city’s best street food in Old Delhi’s Chandni Chowk.

You’ll notice that breads such as chapatis, naan and roti are more popular than rice in Delhi and people use bread to mop up curries and sauces (with their right hand), instead of using cutlery. Dosa is a tasty thin pancake that you dip in tomato pickle, coconut chutney or mint yoghurt. Try it stuffed with dhal or potatoes.

A mouth-watering dessert option is called jalebi. These are deep-fried swirls of batter that have been soaked in sugary syrup beforehand. They will melt in your mouth and disappear so quickly that your taste buds will instantly be craving more!

After a heavy meal, you’ll be presented with what looks like a cluster of crushed nuts and seeds. Paan is a combination of areca nut, betel leaf, lime paste, spices and sometimes tobacco. It is chewed as a breath freshener and mouth sweetener and also helps settle the stomach and aid digestion.

2. Get fitted for traditional Indian clothing 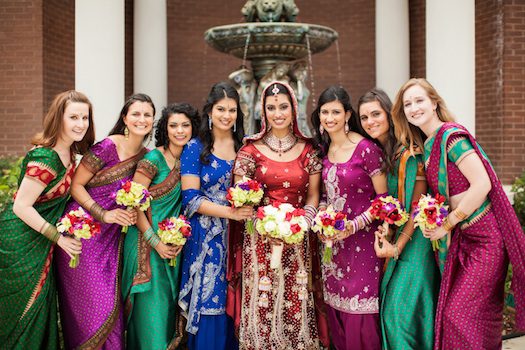 One thing you’ll notice about the clothes in Delhi is the level of craftsmanship that goes into making them. Women’s sarees are often adorned with beautiful beads, precious gemstones, sequins and crystals and you can imagine the amount of hours it takes to create the elaborate designs.

Embrace the traditions and have a memento of your trip by getting a local dress maker to fit you for a saree (a long piece of fabric worn over a petticoat), a churidar (tightly fitting trousers) or a salwar kameez (a long tunic dress and baggy trousers). The range of colors and designs available will leave you spoilt for choice. Commonly used fabrics include cotton, crepe, satin and silk and these can even be stitched with real gold and silver embroidery.

After you’ve bought your clothing, the exciting part is searching for the accessories to match. Indian women are very stylish and love to accessorize to the max, so you can be sure to find bangles, scarves, earrings and necklaces in every color and design imaginable.

Men can take advantage of the plethora of tailors in Delhi and get a custom-made suit for the fraction of the price of a Saville Row suit. A good place to go is Khan Market where tailors will happily measure you and quote you a price, or alternatively copy a suit that you already have. Men can also opt for the traditional option of Indian pyjamas or kurtas (loose fitting Indian shirts).

3. Have fun bartering at markets 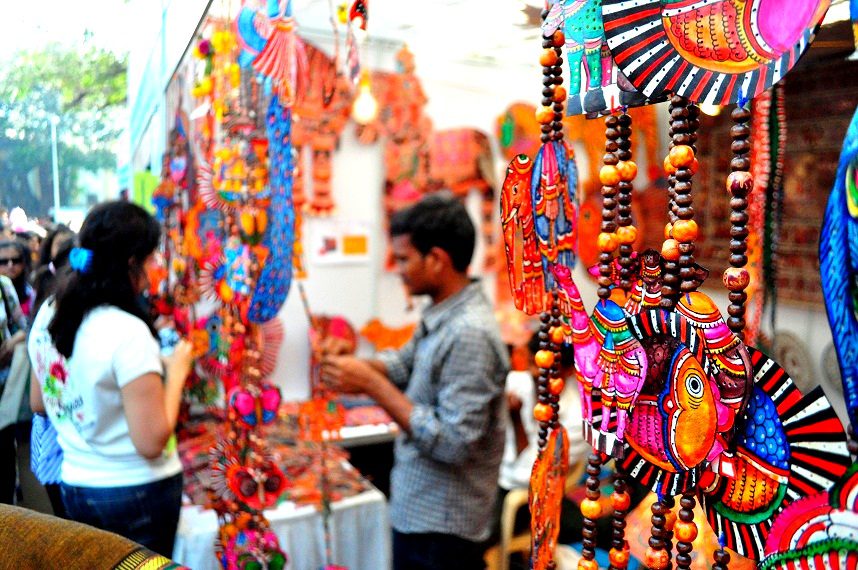 Delhi is a shopaholics paradise and a shopping trip here is hugely entertaining because of the fact that bartering is expected! It may take some practice, but you’ll soon be a pro at haggling. Don’t be afraid to assertively say no, jokingly clutch your chest in shock when the price is revealed, walk away, or say that another vendor has offered a much cheaper price – it’s all part of the fun and games. A good rule is to start the bargaining process at half of what the seller has asked for.

Bargain-hunters should head to Chandni Chowk in Old Delhi. It’s one of the oldest bazaars in the whole of India and you’ll find narrow alleyways full of thousands of stores. The random selection of goods on offer will never fail to surprise you – you’ll find old cameras, dried fruit, antiques, coins, medical equipment, sweets, musical instruments, chemicals, fireworks, vintage records and wedding clothing to name just a few things. 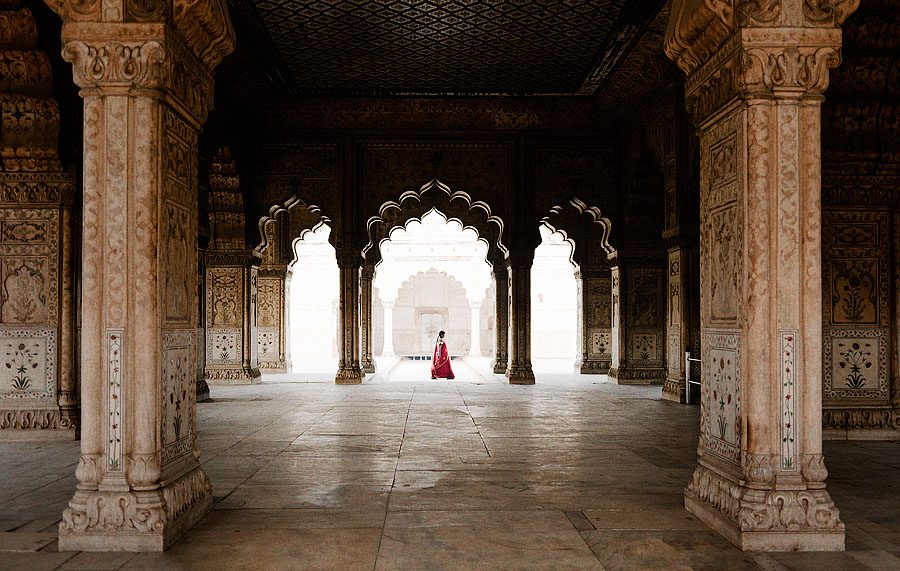 One of the most fascinating things about Delhi is its rich history. It’s a vast city full of architectural wonders, where history and tradition is juxtaposed with modernity.

Delhi is separated into two parts – Old Delhi and New Delhi. Old Delhi is the place to find UNESCO World Heritage Sites and thriving markets and bazaars. New Delhi is the home of plush shopping malls, extravagant buildings and the city’s best museums and galleries.

Be sure to visit Qutab Minar which is the world’s tallest brick minaret and Delhi’s most beautiful example of Indo-Islamic architecture. To see a remnant of the powerful Mughal era, you should go the spectacular Red Fort, which is one of Delhi’s most iconic landmarks, featuring walls built in 1638. You can go inside an authentic Emperor’s tomb by planning a visit to Humayun’s Tomb, which is said to be the inspiration behind the Taj Mahal.

Get lost in Old Delhi’s narrow alleyways and daydream about the ancient past. There’s a thrilling discovery around every corner and you’ll find a plethora of Hindu and Jain temples, Islamic mosques and Sikh Gurdwaras which make marvelous photographs.

India Gate is a 42 meter high archway that pays tribute to the Indian soldiers killed in World War I and the Afghan Wars. It’s the centerpiece of Delhi and the lush green grounds are a great place to relax and have a picnic.

If you’re looking for a modern architectural wonder – be sure to visit the Lotus Temple. It’s a temple built in the shape of a lotus flower, constructed with 27 marble-clad petals and took over 10 years to construct.

5. Get a henna tattoo 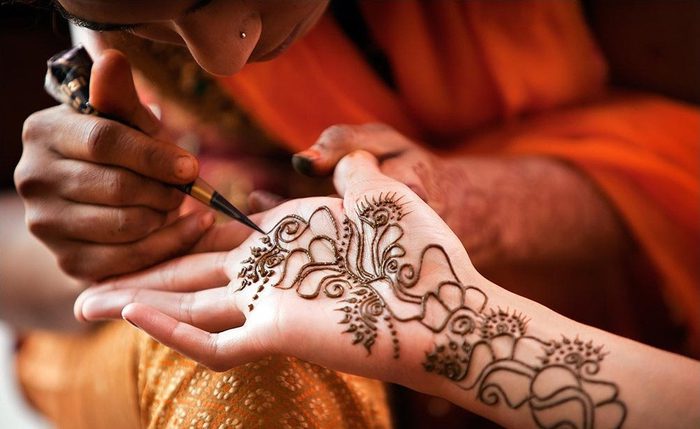 Henna (mehndi) is a dark brown paste that is applied to the skin by squeezing it through a cone shaped tube. It is a non-permanent way of decorating the skin with very intricate and extremely beautiful designs. After the henna paste is applied, you must wait around 20 minutes for the paste to dry. It will then begin to crack and is wrapped with tissue or plastic wrap to lock in body heat, which intensifies the color. The wrap is worn a minimum of 3 hours and when it is taken off, the color darkens through oxidation and can last up to three weeks.

It used to only be applied on women, but as time has passed, more men have begun wearing it now too. Women traditionally have henna professionally applied to their hands by a henna artist before weddings and important festivals. A common tradition is for the bride to have a groom’s name or initials hidden in her henna design before her wedding day.

You will find many henna artists all around Delhi – especially outside temples and at markets. Lajpat Nagar Market is a great place to get henna and Hanuman Temple in Connaught Place is another very popular place which has over a hundred henna artists waiting to create a new masterpiece!

Indian celebrations are out-of-this-world and often last for several days. If you’re lucky enough to go to a wedding, you’ll be part of a musical, spiritual and culinary extravaganza. An Indian wedding typically lasts for three days – and includes a Ganesh pooja ceremony (blessing ceremony with a priest and close friends of the bride and groom) a mehndi (henna) party for the bride and her female friends and a sangeet ceremony, which is a celebration of dance, music and games where families unite for singing, dancing, joking and feasting.

Rituals vary widely depending on the particular religion (Hindu, Jain or Sikh for example) but can involve unusual processes such as cleansing the groom by rubbing milk and turmeric paste onto his face the day before the wedding and watching the groom add a thousand blades of grass (one at a time) to the holy fire in front of a priest for good luck in marriage.

The groom’s procession to the wedding temple involves sitting on a white horse whilst the wedding party follows and dances to the beat of the dhol (an Indian drum). Indian wedding ceremonies typically involve a lot of dancing, exchanging gifts, photo shoots, religious rituals, a ceremonial fire and feasting. Kanyaddan (father giving away his daughter) and Saptadpadi (the seven step ritual of vows) are very important. There are also amusing games such as the bride and groom racing to their seats after circling a fire. It is believed that the first one to sit down will have the upper hand in the marriage. The lavish decorations, stunning outfits and flamboyancy makes Indian weddings a once-in-a-lifetime event.

If you’re not lucky enough to attend an Indian wedding, be sure to see if there are any Indian festivals during your visit to Delhi. Holi Festival is India’s annual spring “Festival of Colors” that celebrates the end of winter and the triumph of good over evil. People buy packets of colored powder (abir) and throw it on each other until they become almost unrecognizable. It’s a rowdy festival marked by music and madness with dancing, street food, folk theater and sprinklers on the street!

There are several other big festivals during the year including Ganesh Chaturthi, Durga Puja, Dusshera and Diwali. These often involve beautiful artwork, feasts, dancing, singing, lights, decorations and unique traditions. 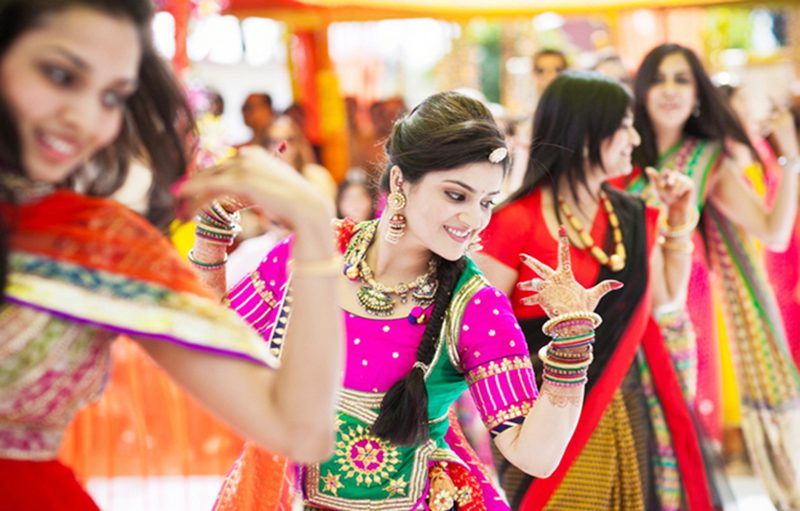 A visit to Delhi isn’t complete without learning some authentic Indian dance moves and appreciating the diverse local music scene.

If you go to the shrine of the famous Sufi saint Hazrat Nizamuddin Auliya on a Thursday, you will witness a musical and spiritual spectacular. Qawwali translates as devotional music, and you’ll hear Sufi devotional singers performing qawwalis in an almost trance-like state, with a tempo that gains momentum and has the crowd joining in. This is a magical experience to witness at sunset – the aroma of rose water and incense fills the air and the energy and displays of emotion around you will leave you feeling incredibly relaxed.

For a spectacular visual display of music and arts with a historic backdrop – visit the Sound and Light Show at Red Fort. It will take you on a journey through time and you’ll learn about the rise and fall of kingdoms and empires in Delhi through music, narration and dramatic lighting.

Habitat World is the place to go to see dance, music, and theater recitals as well as being able to sign up to take part in workshops and learn some moves yourself.

If you’d rather try out your dance moves in a modern setting, head to @Live, which is a nightclub that has high-energy Bollywood hit tunes and famous Indian DJs.

So there you have it – seven unforgettable experiences you can have in Delhi. With its mouth-watering foods, colorful festivals, vibrant music scene and architectural masterpieces, you’ll be sure to have a trip that you’ll never forget.